This  page is about Web Misinformation, the work of the ignorant algorithm.

By and large I put up with the billion untruths and inaccuracies on the www, on the principle that it’s a small price to pay for a world of free information.

When Somebot  says you’re not married to the woman you’ve been married to for over 40 years it does get you a tad irritated. 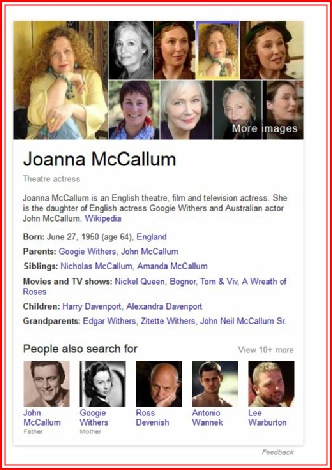 Somebot has also decided, from a typo in just one of the many obituaries of Googie Withers, that Joanna’s Grandmother, Lizette Withers, was really called Zitette. This has been taken up by Wikipedia and accepted elsewhere with enthusiasm.

Have you ever tried to edit a Wikipedia page? It’s a job for someone with a different skill-set and a very different temperament than mine. I know this because I’ve tried.

Still, I’ve had a go at some corrections via the Google ‘edit’ button, though I resent spending my time this way.

In fact, since I first  put up this page, corrections have been  made …. But not for the misnaming of Jo’s grandmother. I await the next  error  with  interest.