I once knew a blacksmith named Tod

One day in his house

I discovered a mouse

All of whose feet had been shod. 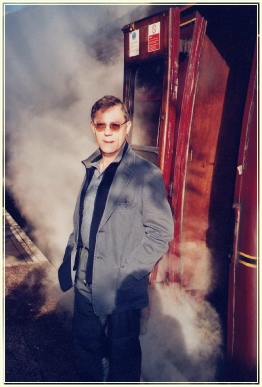 I was born in London. My father was the writer John Davenport, who is best remembered as a literary critic writing for the Observer newspaper. After attending a great number of schools, including Blackfriars Dominican School, Laxton, I studied at LAMDA.

Find “Ortho’s Brood” online and you will see that some cretin has given the entire plot away in the description of the book. I myself suggested a kind of ‘B’ movie look for the  cover - and now I’m not so sure!

My acting career included several tours, and stints in repertory companies such as Leicester, Derby and Nottingham. On the West End stage I was King Nicholas in “The Sleeping Prince” (St Martins); Siro in the musical “Mandrake” (Criterion); and Cyprian Phipps in “Bloomsbury” (Phoenix). There were appearances at Greenwich, Wimbledon and The Hampstead Theatre Club, and I worked on multiple occasions at the Bristol Old Vic. On television I played Martin Bagley in “Brassneck”, the satirical drama by David Hare and Howard Brenton.

On quitting acting (though in the last years I’ve been doing a bit here and there) I worked for two years as an executive in Lintas, the Unilever advertising agency, and did not set up as a writer until I’d left behind another career - as a theatre manager with the Stoll Moss group.

My favourite West End theatre is the Apollo, where my grandmother, Muriel George, starred in Harry Pelissier’s “Follies” at the start of the 20th Century.

It is in fact not a very practical theatre for modern use, and in December 2013 a collapse of plasterwork injured many. As a fan of the place, I felt somehow slightly responsible.

It was BBC Radio that gave me my first break as a writer and I remain extremely fond of that medium.

The late great Richard Griffiths stars in these adaptations (above). His Mr Mulliner is light and elegant and there are many other wonderful performances throughout.