“I was beguiled by EDDIE AND MISS SIMPSON, a well-turned thriller by Roger Davenport: an ingenious plot with a surprise twist at the end.”

GROWING PAINS (‘Someone to Watch Over Me’) Pick of the Day, Sunday Times

The subversive comic writer Hector Hugh Munro – better known as Saki – is variously described in this delightful drama/documentary as “the godfather of modern comedy”, the “chronicler of the Edwardian age” and a forerunner of Evelyn Waugh, Noel Coward and Roald Dahl. He had an unhappy childhood (his mother was killed by a runaway cow and he was raised by two nasty aunts), worked as a foreign correspondent in the Balkans and died at the Battle of the Somme. The telling of his life story is neatly based around a magazine interview, letters to his devoted sister Ethel and the observations of admirers such as Will Self and Alexei Sayle. Saki’s personality – haughty, politically incorrect, queeny – proves as intriguing as his work, in which he pithily satirised convention.

LOWLAKE … is a book that you can’t put down ...ORTHO’S BROOD (is) very gripping” (Highland News Group)

‘Till the Clouds Roll By’, last night’s episode, was a rich emotional   journey … (Daily Telegraph) 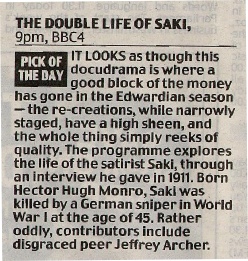 DOUBLE SAKI WAS ONE TO SAVOUR … (This) quietly compelling drama-documentary … In a recreation of his interview in 1911 with The Bodleian, the author emerged as languid, self-deprecating, wryly amused, yet guarded. How contrarily Scottish Saki was.